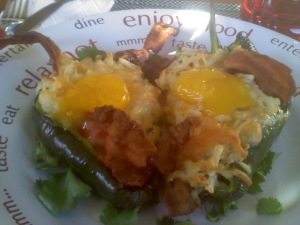 This is an entire breakfast all in one delicious pepper!  Such a great way to start the day..

You will need:
1 Poblano Pepper..per person!
The following amounts will stuff 2 peppers = 4 halves..enough for 2 people!

If you are serving more than 2 people, just add to the ingredients accordingly! 🙂
About 2 cups of pre-shredded Hash browns (I used frozen hash browns, but shredded fresh potatoes will work too)
2 Cups of Shredded Mexican Mix Cheese (Monterey Jack/Cheddar)?

Directions:
Crisp up the bacon prior to preparing this dish..and set aside.
Split the Poblano Pepper in half, and remove all the seeds.
In a medium bowl mix the hash browns and the cheese together, sprinkle the Garlic Powder, S&P to taste..mix it in with the cheese.
Lay 2 crisp bacon slices inside each pepper half.
Fill each half of the pepper with as much of the hash browns that will fit in your particular sized pepper..on top of the bacon!
?

Sprinkle some more shredded cheese on top and
bake at 350, for approx. 30 minutes..until the hash browns are golden and the peppers soften up!
Remove from the oven and with a spoon, carefully create a well in the center of the hash browns and gently crack an egg into each half!
Put back into the oven for a few minutes, until the egg is the way you like eggs! 🙂
~Now you have a Stuffed Poblano Breakfast Bake ready to be enjoyed!