Whaaat? Fried Cinnamon Rolls?!  Don’t blame me, I had a couple of leftover Pillsbury Cinnamon Roll dough balls just wasting away in the fridge, what was I supposed to do…not stuff them with cream cheese, fry them until crispy & coat them in powdered sugar??!  I think not..lol!

Besides, it’s Super Bowl snack preparation week and there has to be a fried sweet treat on the menu! 🙂

Just when I thought I’d seen every single possible method and recipe for cinnamon rolls known to mankind..boom, it hit me like a ton of butter!  Mmm..a cinnamon roll, stuffed with gooey cream cheese, rolled up &  fried,  so that it totally explodes upon bite impact!  Ahh..you’ll need a moment to compose yourself! 🙂 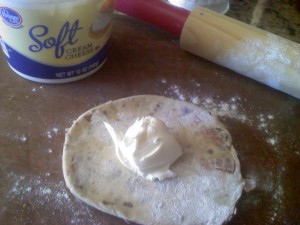 Enough will power to not eat every last one!  🙂

Fill it with a generous scoop of cream cheese!

Fry them up in the oil..drain on a paper towel..dust with powdered sugar 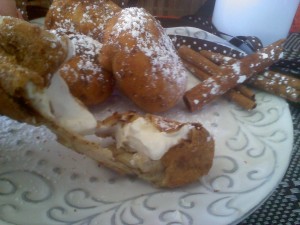 Take a warm, sticky, creamy bite, freak out at how amazing they are, & then repeat!