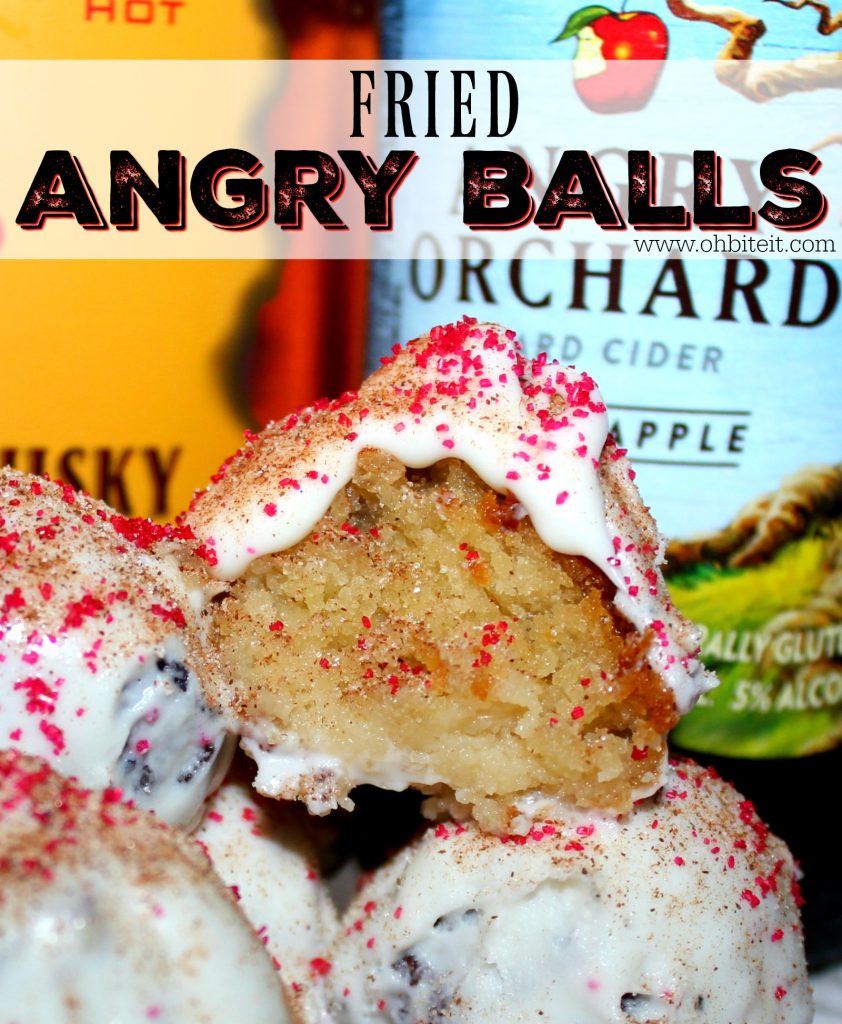 I might be a little slow here, but I just recently learned about angry balls.  I mean, I’ve heard all about angry balls before (from my friends lol), but I’ve never experienced them umm, first-hand for myself.. until now, and let me tell you, it was a WOW moment for sure! 🙂 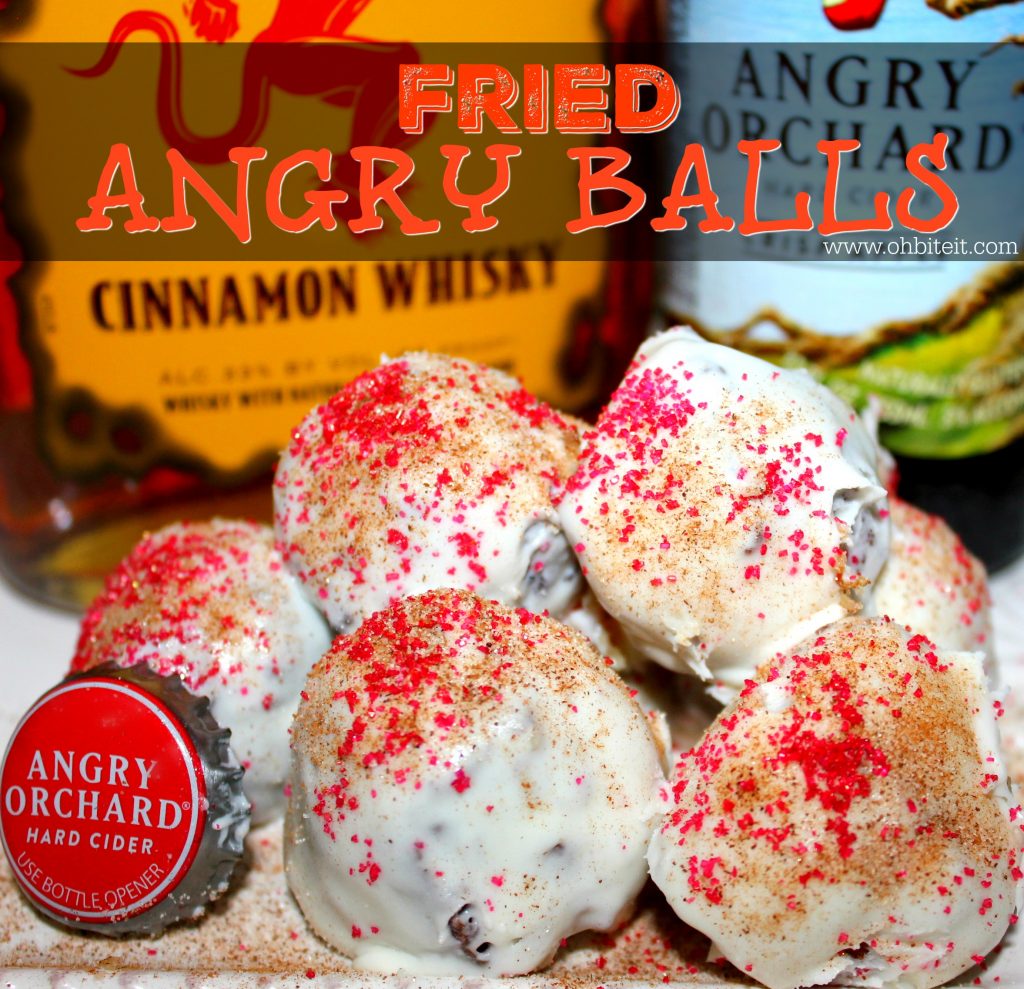 I don’t know what I found more enjoyable about these balls, their name, or their incredible flavor, but I knew that I was definitely a new found fan of angry balls..lol. 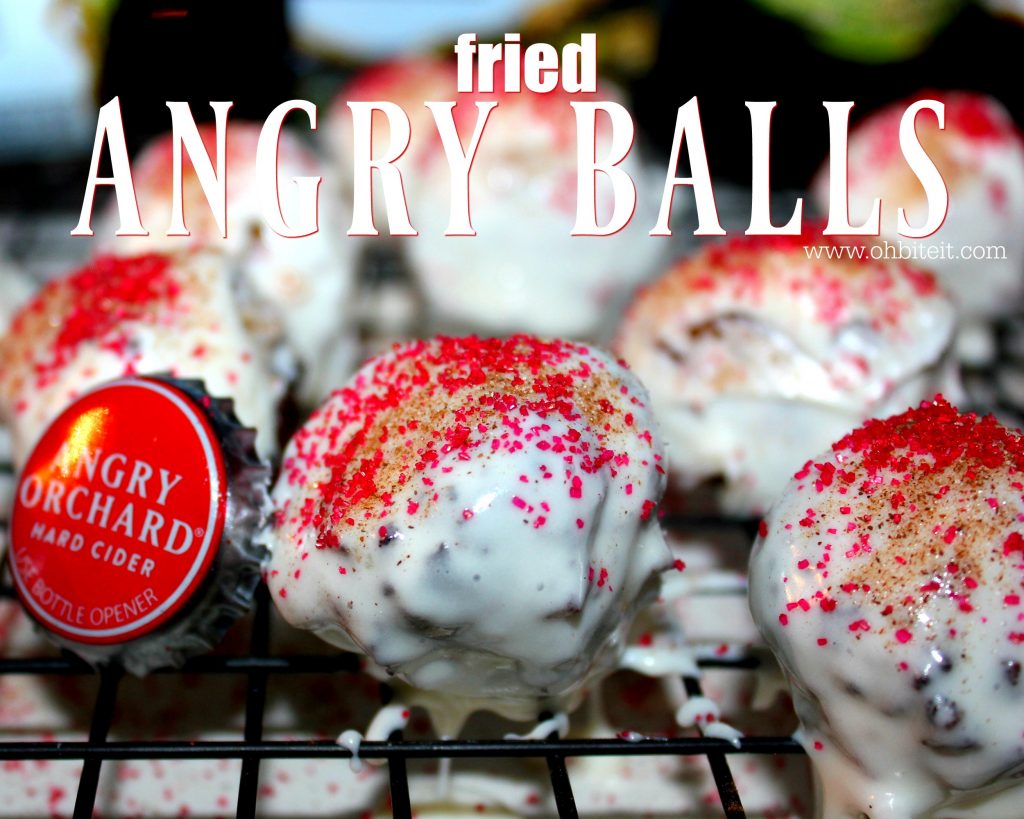 These balls are so well balanced, the flavors are amazing, and I just couldn’t wait to set them on fire… by way of frying them of course.  Hey, if regular angry balls are good, fried angry balls are better..right? ..RIGHT! 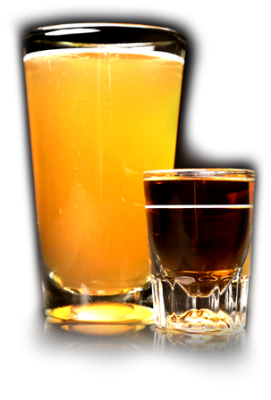 Each fried angry ball is sweet glazed vanilla cake, which has been literally soaked in liquor, and fried into a perfectly golden crispy, yet tender treat.  The sweet frosting, cinnamon, and pretty red sprinkles make these the best tasting balls EVER~!

*THESE BALLS PACK A PUNCH.. the alcohol remains, don’t be fooled.  …not for kiddos!  🙂 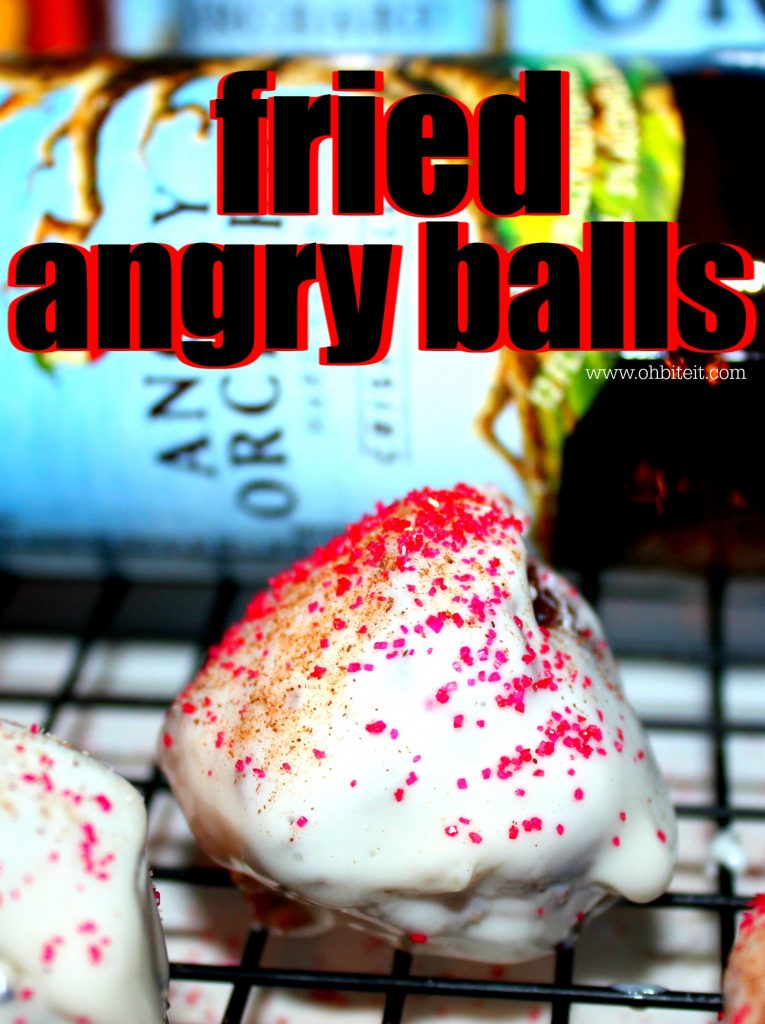 You won’t be able to get enough of these balls, serve them as a fun late-night dessert, or bring them to your next get together, where they’ll quickly become the life of the party.  And you will be very, very popular!  ~Make LOTS! 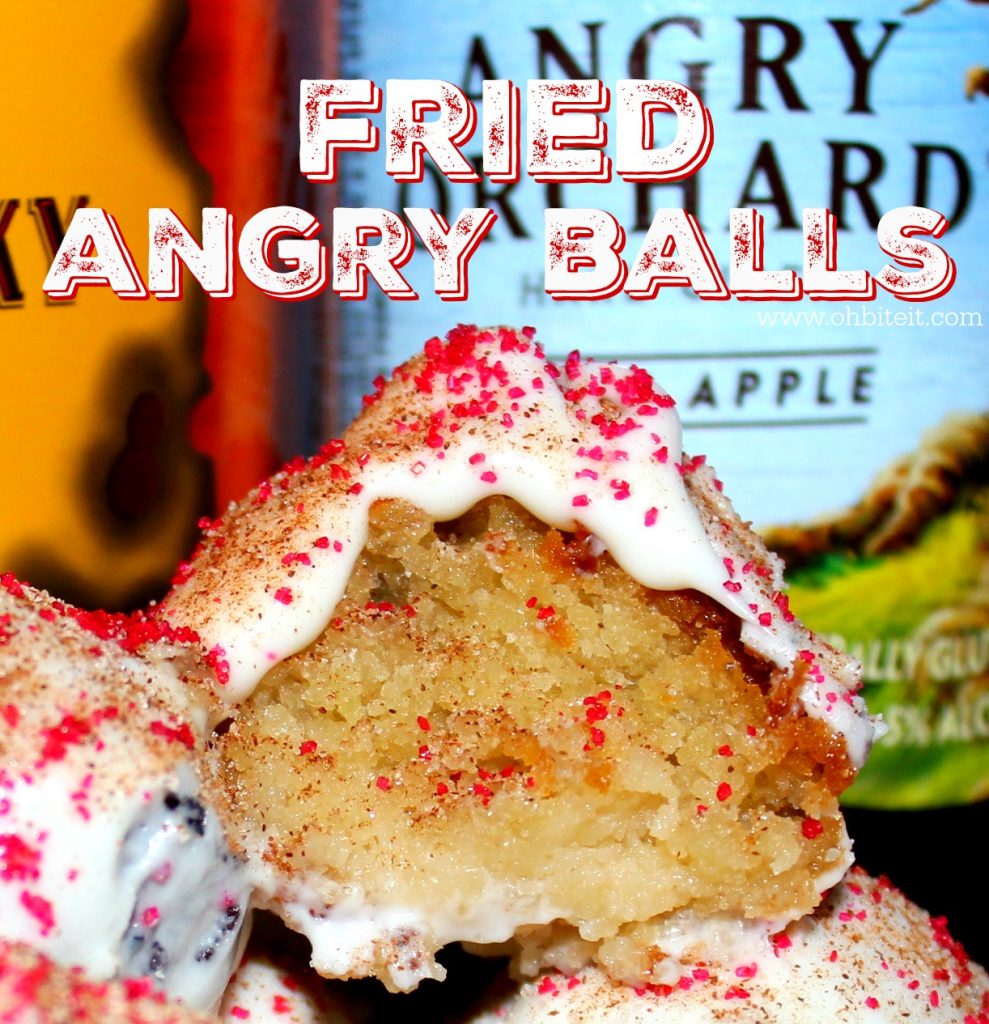 What you’ll need for LOTS of medium sized angry balls: 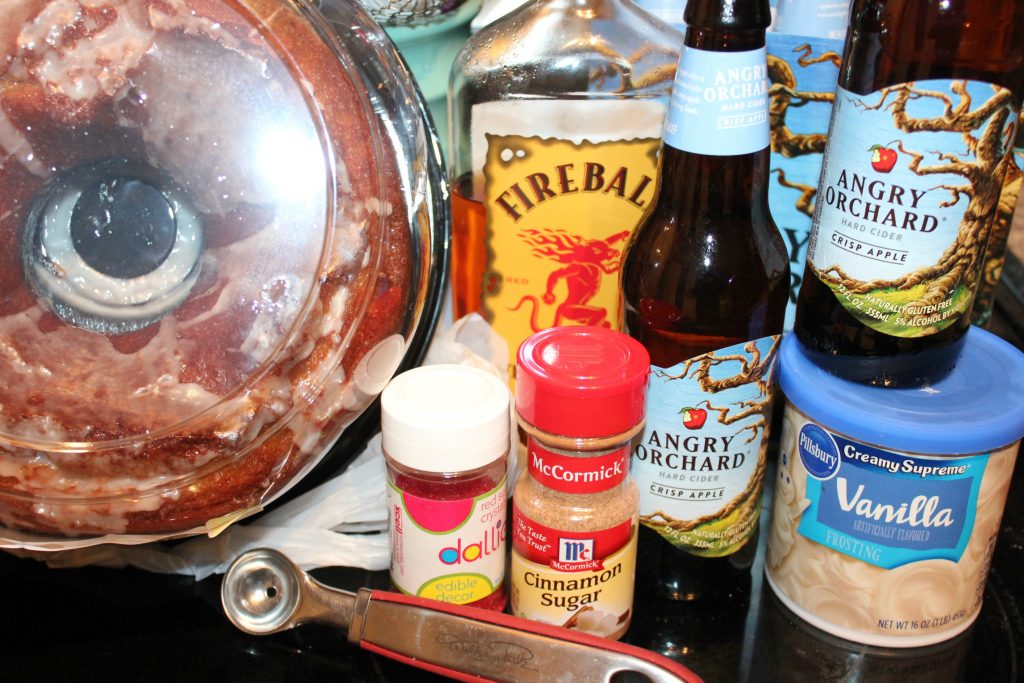 Cake, a firm cake.. your choice of flavor.. I used vanilla

oil for frying.. I used canola..veg is fine too 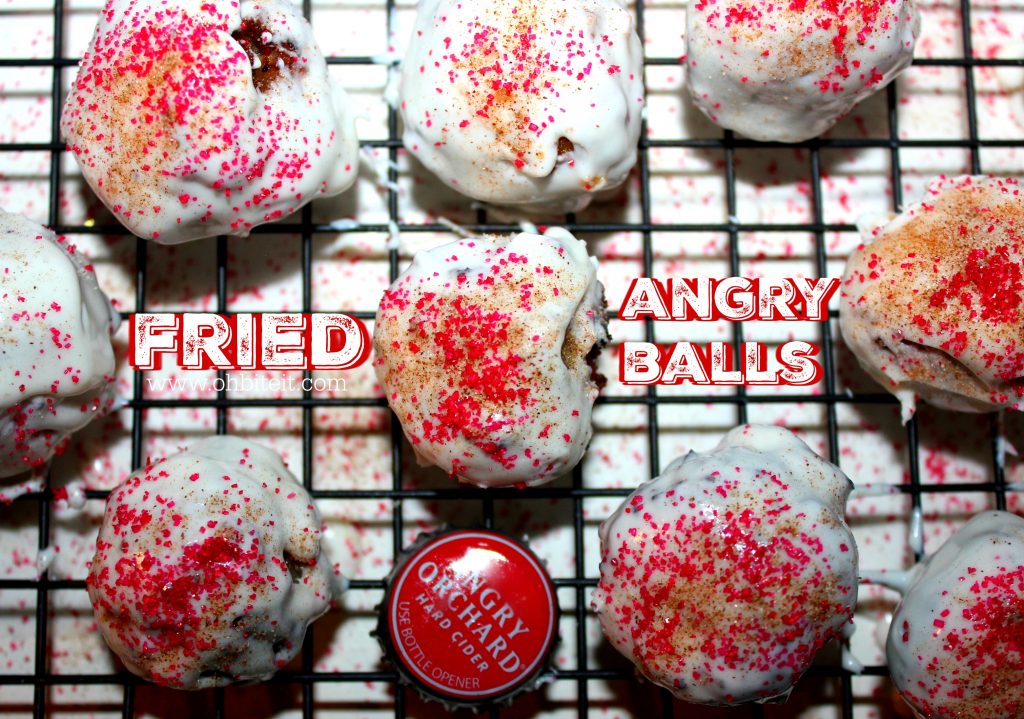 In a large bowl, combine the Angry Orchard and the Fireball… 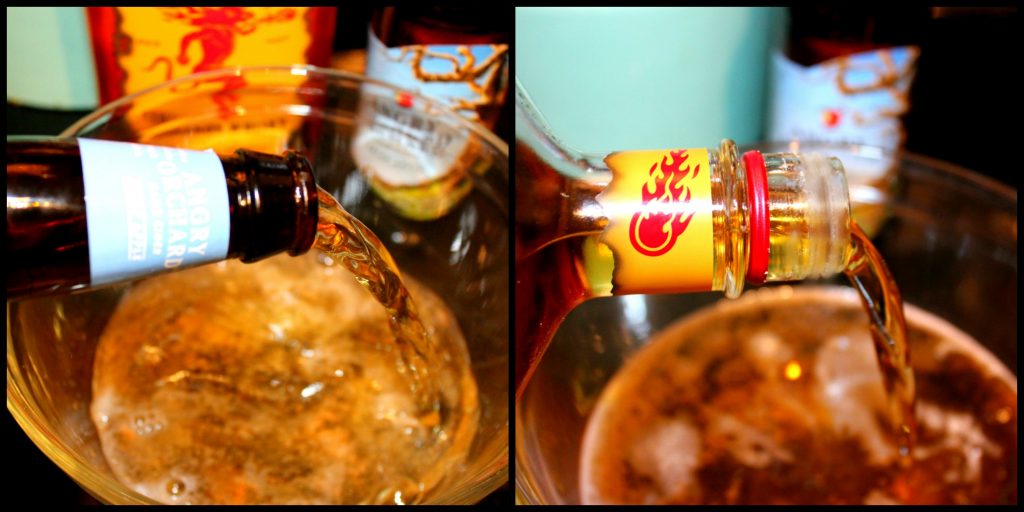 Cut the cake into chunks so when you roll them into balls, they’re approx. 1″-2″ in size.. 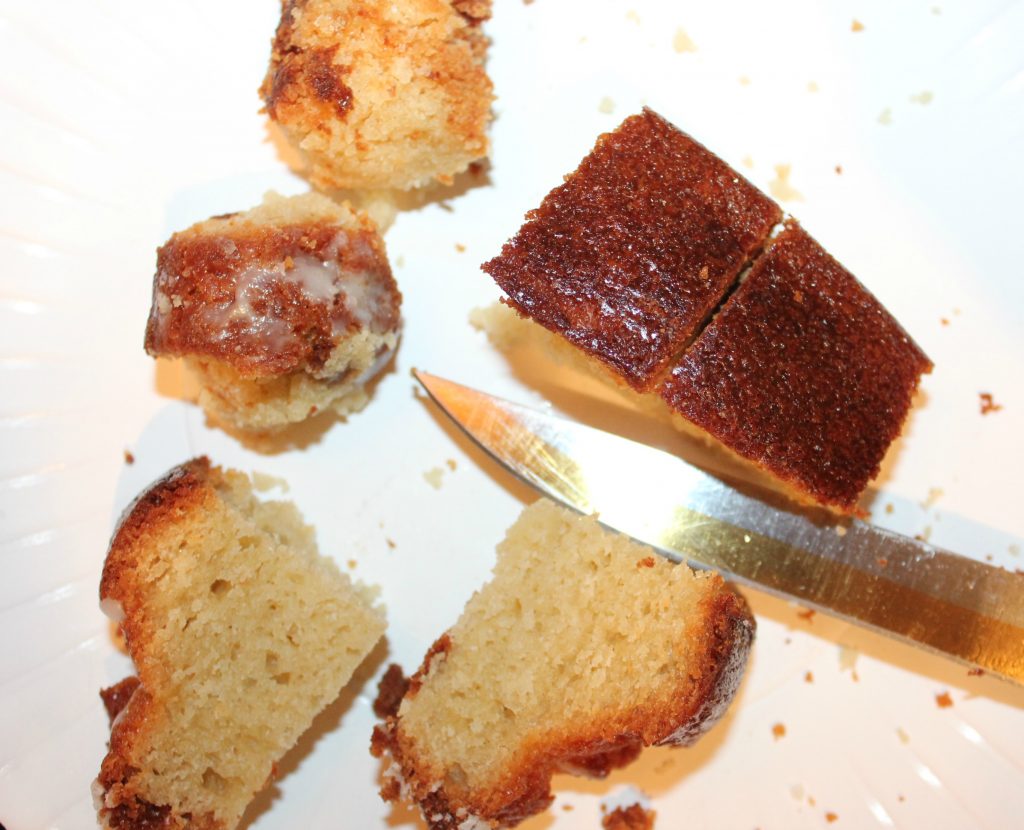 Roll each cake chunk into balls.

Quickly dunk the balls into the alcohol…and then gently drop a few balls at at time directly into the hot (350 degree) oil.. just for a few seconds, until the balls are slightly golden… 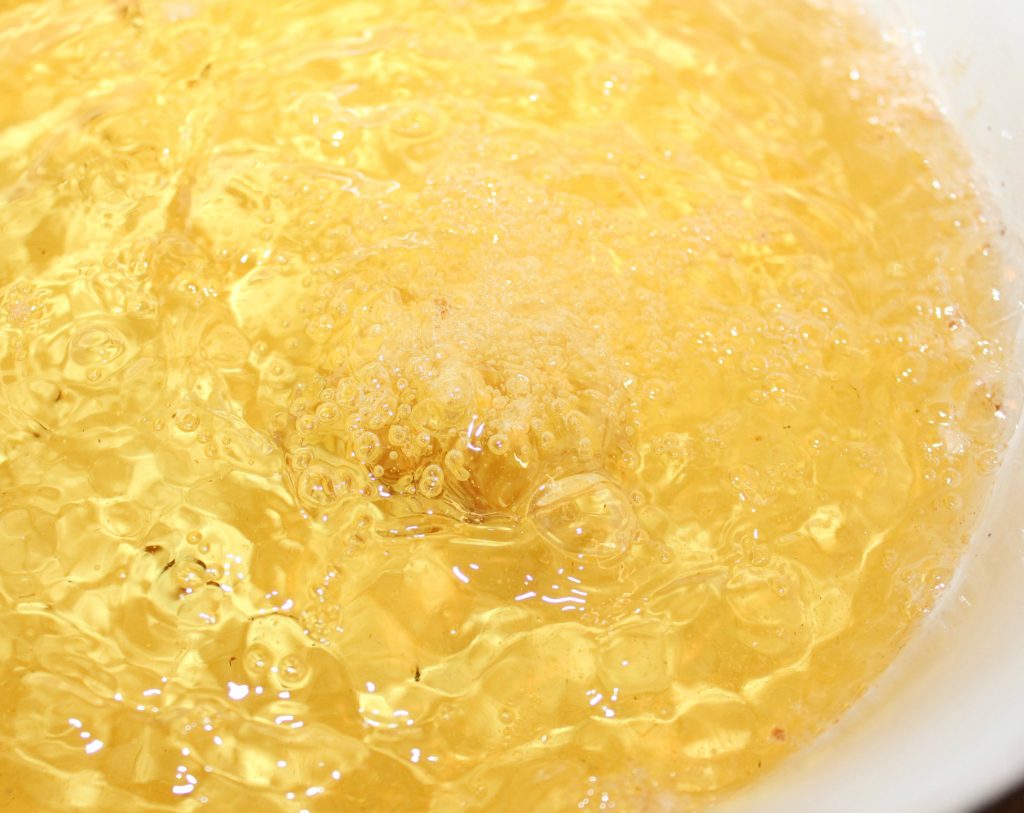 Let them cool..  While they’re cooling, warm up the frosting, either in the microwave or over a double boiler, just until it’s pourable.

glaze each ball with the frosting… 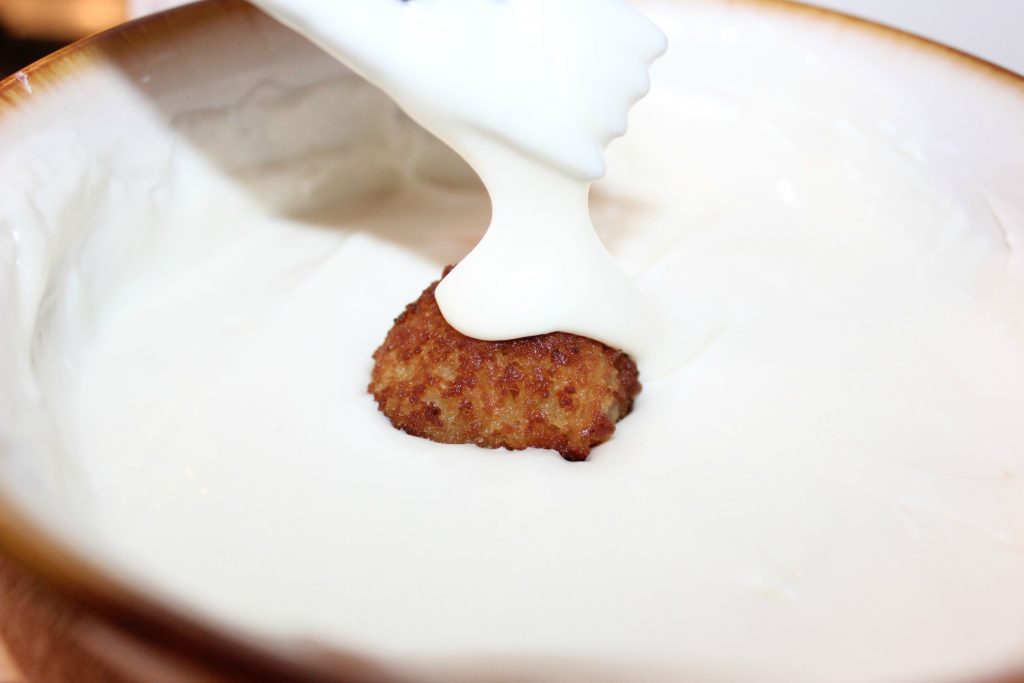 And add a dash of cinnamon/sugar and red sprinkles… optional 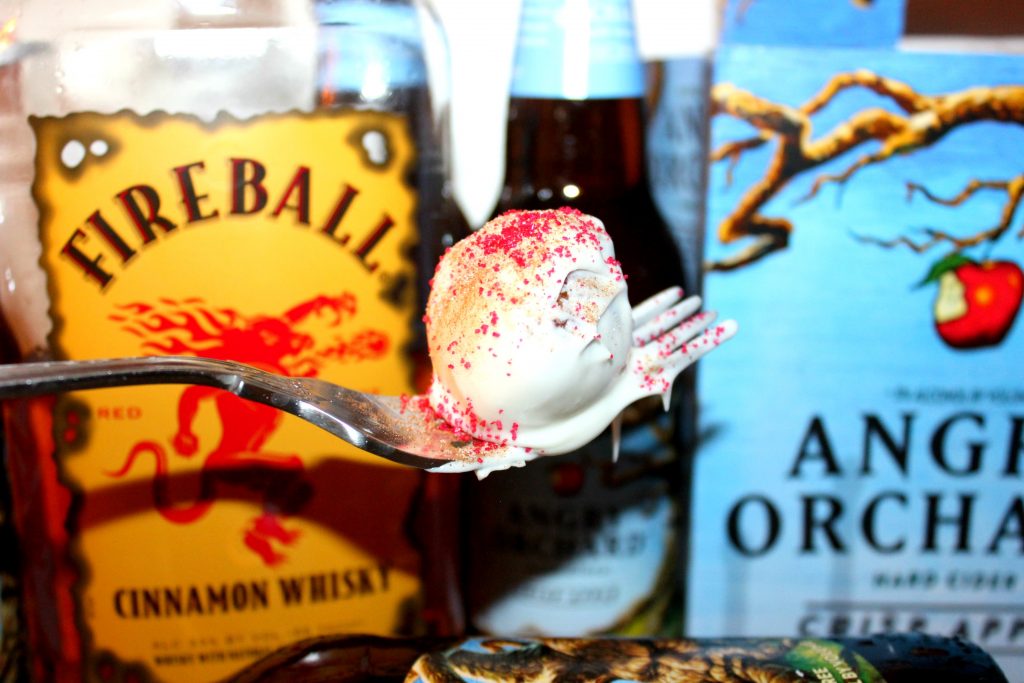 Let them set up for a few minutes… 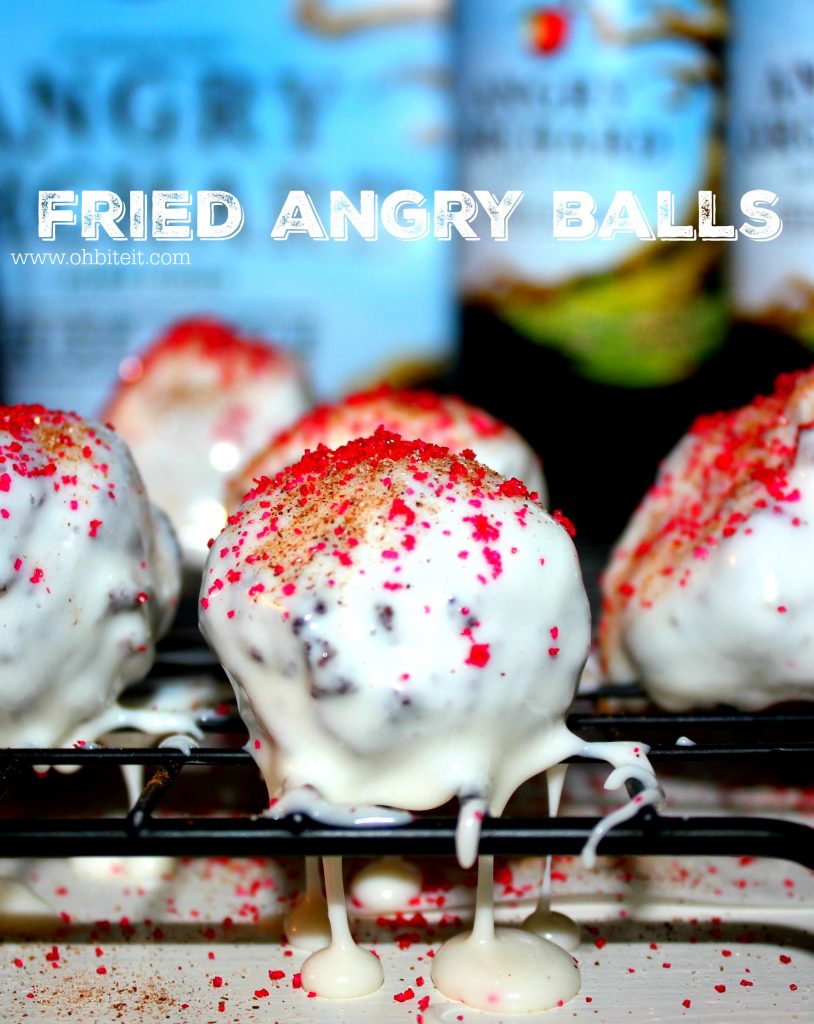 And then start popping those Angry Balls… 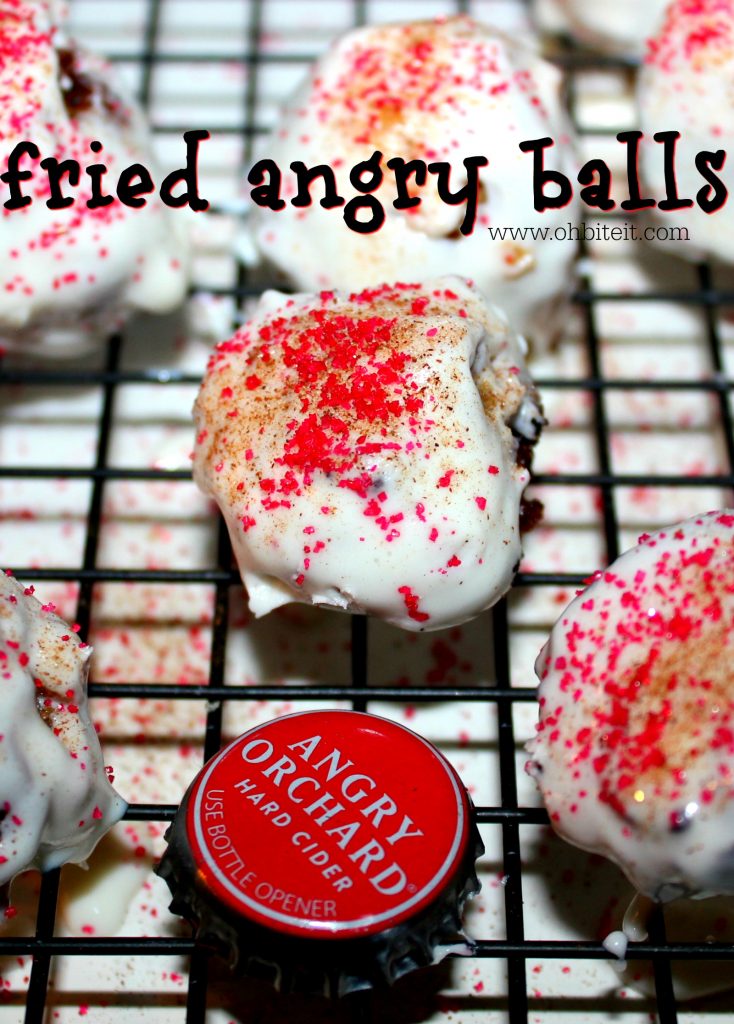 Serve them to all of your family and friends… 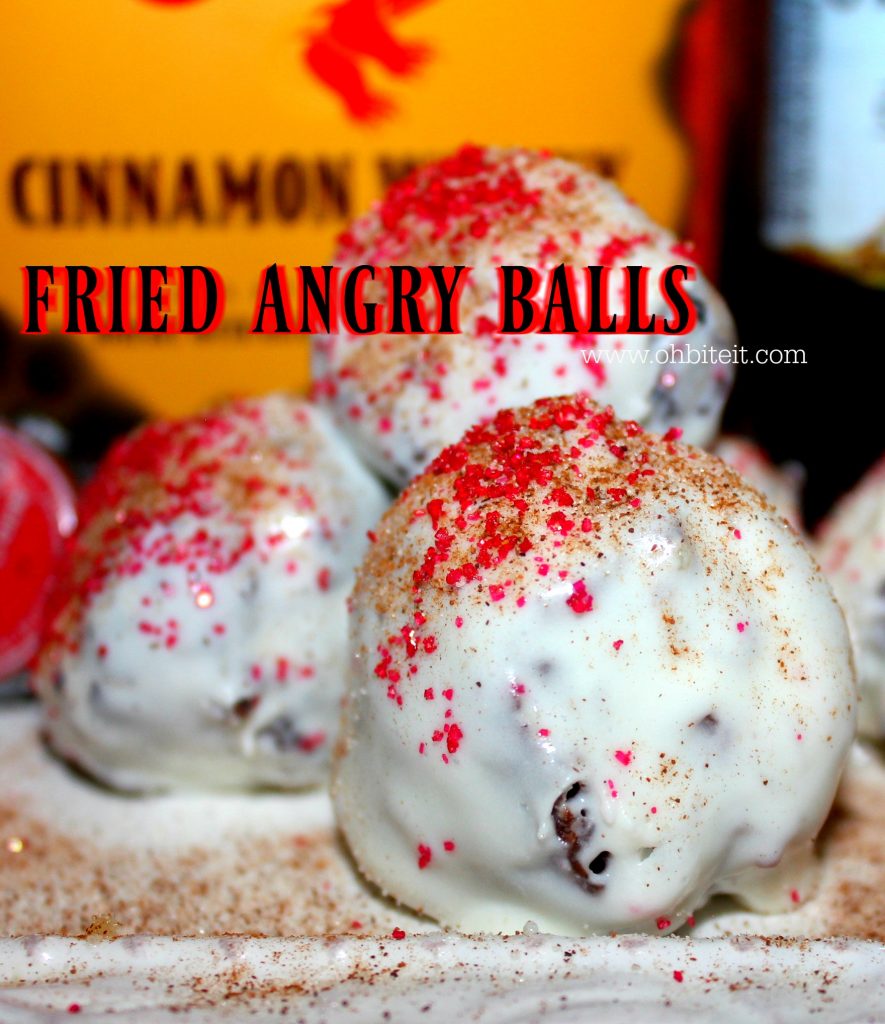 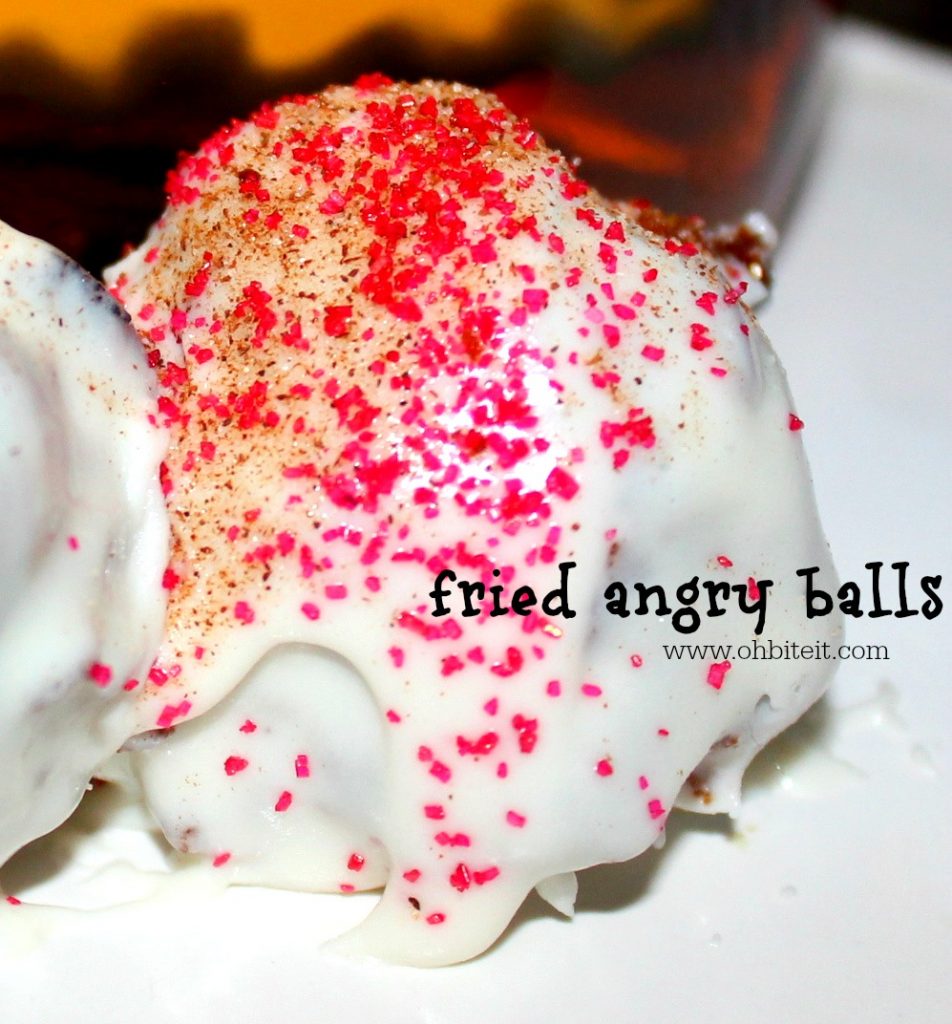