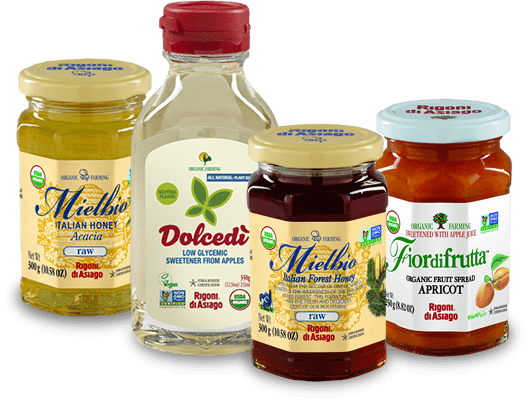 Rigoni di Asiago is a family-owned company from Italy that produces delicious, organically farmed jam, honey and chocolate spreads. The Rigoni family lives in the Altopiano di Asiago, a mountain plateau in North Italy famous for its sunny climate, meadows and woodlands. In this tiny corner of paradise where man still lives in direct contact with nature, honey and jam making are long-standing traditions and, as a natural consequence, the Rigoni family has mastered these crafts. One family, one business. 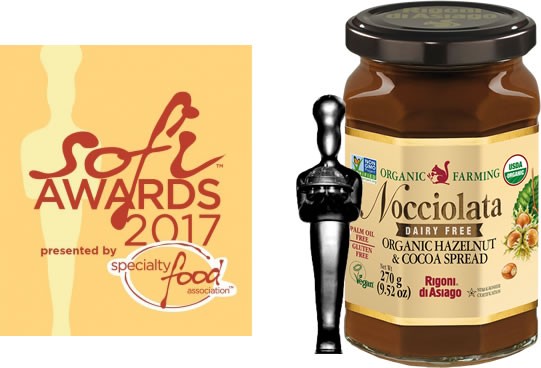 A Family Business That Turned Into a Success Story

Rigoni di Asiago® has always prioritized innovation to achieve the healthiest and tastiest products that are both good for you and respect nature. The Rigoni di Asiago range comprises Fiordifutta, a unique light fruit preserve, Nocciolata hazelnut and chocolate spread, DolceDì natural sweetener and several delicious types of honey from every region of Italy.

All the Flavour of Tradition

Fruit of the Land

The Rigoni family lives in the Altopiano di Asiago, a mountain plateau in North Italy famous for its sunny climate, meadows and woodlands. In this tiny corner of paradise where man still lives in direct contact with nature, honey and jam making are long-standing traditions and, as a natural consequence, the Rigoni family has mastered these crafts.

One Family, One Business

The story goes back nearly 100 years ago with the Rigoni grandmother, Nonna Elisa, whose craftsmanship and love of nature so greatly influenced her family. After the ravages of the First World War, the young widowed mother of nine hungry children used her late husband’s beekeeping skills to start her own little activity with her eldest sons, Mario and Paolo. Mountain folk know their honey and word quickly spread that Elisa’s was by far the best in the area. By the 1930s Apicoltura Rigoni had already become an established household name all over Italy. Today, Nonna Elisa’s family run the company inherited from their grandmother with her same enthusiasm and love for nature.

The Milestones of Growing Success

The company really started to expand both in product range and on the map in 1979 when Rigoni were the first to introduce monofloral honey to the Italian market. A single floral honey has a distinct and easily identified flavour which was immediately appreciated by consumers. During the mid 90s, organic farming was increasingly spoken about and it was the Rigoni’s innate respect for nature which convinced them to be one of the first companies to go organic and merit the Certified Organic label. Encouraged, confident and ready to tackle new challenges, the family looked to another tradition to increase their product range. They created Fiordifrutta, which come from organic farming and are fruit and sweetened with apples rather than sugar. In 1997 the company took on the name it has today: Rigoni di Asiago. The same year saw the successful launch of Nocciolata spread and the natural sweetener made from apples used in Fiordifrutta was given its own brand name, DolceDì. Just 10 years later, market research figures testified that Fiordifrutta was the No.1 leading jam in Italy.

A Company Out to Conquer the World

From Tradition to Innovation

Over the years the company has drawn inspiration from traditional Altopiano recipes and has made good use of Nonna Elisa’s values as a foundation to develop new ideas and modern processing techniques.

A Laboratory for Innovation

It is not always easy to preserve the original flavour and essential nutrients of fruit when producing on a large scale. Rigoni di Asiago has achieved this by adopting an innovation-centric company policy. In constant pursuit of perfection, Rigoni di Asiago has an in-house lab to run quality checks at each production stage from cultivation right through to packaging.

Rigoni di Asiago is strongly committed to offering consumers quality ingredients and genuine flavours. Products are constantly reviewed with ongoing research into nutritional properties. Following this criteria, the company has upgraded facilities and put more reliable new processes in place to enable a greater product range with ever higher standards.

A Love for True Values

Quality and Respect for People

Rigoni di Asiago believes that real values respect people and nature. This ethical undertaking is adhered to during farming, processing and marketing. Rigoni di Asiago is committed to providing favourable working conditions and fair wages both in Italy and Bulgaria where the company owns extensive organic farmland. Over 2000 seasonal fruit-pickers and 200 full-time workers are employed there which greatly helps the local economy.

Healthy… and Quite Simply Good

Rigoni di Asiago products embrace a love of good food, authentic taste and quality. Perfectly ripened fruit is selected, washed and frozen within hours of being harvested. Low-temperature processing methods preserve nutritional and organoleptic qualities of the basic ingredients as much as possible. Each product is the result of scrupulous work that complies with the highest standards. Traceability and numerous inspections, both in-house and by independent certification authorities, guarantee delicious products suitable for all the family.

From Homemade to Organic

Rigoni di Asiago products have been natural and genuine since the start. Going organic and carrying the Certified Organic label since 1992 was simply the next step in the company’s evolution.

Rigoni di Asiago was one of the first in Italy to “go organic” and it rapidly became a national leader: this brand guarantees irreproachable organic quality.

Organic Through and Through

“Organic” reflects genuine respect for nature and an undertaking to reduce environmental impact. At the processing plant in Foza, a cogeneration system provides energy for the plant by recycling steam to reduce the amount of water needed for low-temperature processing and any waste water is fully treated before disposal. Finally, solar panels make energy for the production plant, logistics centre and offices.