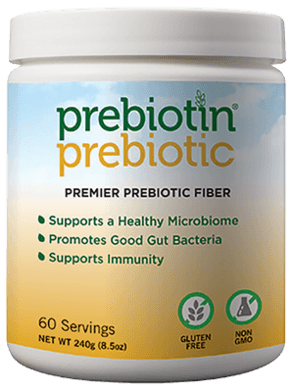 After his education at Princeton, Johns Hopkins, and the University of Pennsylvania, Dr. Jackson began treating patients with a myriad of intestinal concerns. As a successful and popular practicing gastroenterologist in Central Pennsylvania for 40 years, Dr. Frank W. Jackson was always fascinated with “all things gut related.”

In later years, he tirelessly began researching the digestive value of prebiotics, determined to find the best type and formula for a prebiotic supplement that would be the most beneficial solution for a population suffering from the effects of an increasingly dysfunctional Western diet. A diet that is causing a dysfunctional gut microbiome, resulting in a disproportionate rise in disease and inflammation.

His visionary work has resulted in Prebiotin’s current participation in scientific studies, including two funded by the National Institutes of Health. He is also the founder of several companies, including Jackson GI Medical, Chek-Med, GI Supply, and Meducate.

“I’ve been excited to find that the latest research shows the human gut to not just be the place where digestion ends, but the place where your health begins!” -Frank W. Jackson, MD

Frank Jackson was responsible for most of the content, including his popular and informative videos on www.prebiotin.com and on YouTube, until December of 2015, before retiring for medical reasons. This rich and abundant content is scientifically backed and will continue to be reviewed, updated and refreshed. He and his wife make their home in Pennsylvania and Arizona.

“Dr. Frank Jackson was ahead of his time. Among his many impressive qualities, is Frank’s ability to buck traditional mainstream medicine, and to “think outside of the medical box,” although Frank is respected and admired by his peers. He would often comment to me that many patients would never have to set foot in a doctor’s office if they would simply eat right! Frank understood the huge impact that fiber has on our individual health and the health of our nation. That was the genesis of Prebiotin.”

“The impact of Dr. Jackson’s work has propelled Prebiotin to the forefront of the prebiotic movement. What is bigger than our company’s sales, is the improved health status of thousands and potentially millions around the globe. We are hearing from parents and caregivers, as well as physicians and individuals, about the healing benefit of Prebiotin for a wide variety of conditions, and their gut microbiome. That is a legacy worth having. That is the legacy that Frank built. Our Prebiotin team is committed to honoring and building upon that legacy.”

“He’s had a passion for understanding diseases and improving health throughout his career.”

“Frank is a brilliant physician/gastroenterologist and inventor as well as an inspirational role model.”

“Frank Jackson was a tireless, energetic and brilliant doctor, entrepreneur and inventor who had a passion for helping others. He devoted his later years, until his health declined, to help educate and grow the awareness of the health benefits of prebiotic fiber to the general population, well ahead of his time in his understanding of the importance of great gut health.”

The Benefits of Taking Prebiotin

As one of the most medically researched prebiotics, OEI – the prebiotic fiber in Prebiotin – offers many digestive and general health benefits. When you take Prebiotin daily, you naturally nourish the good bacteria that live in your large intestines, thus gaining many health benefits that include: