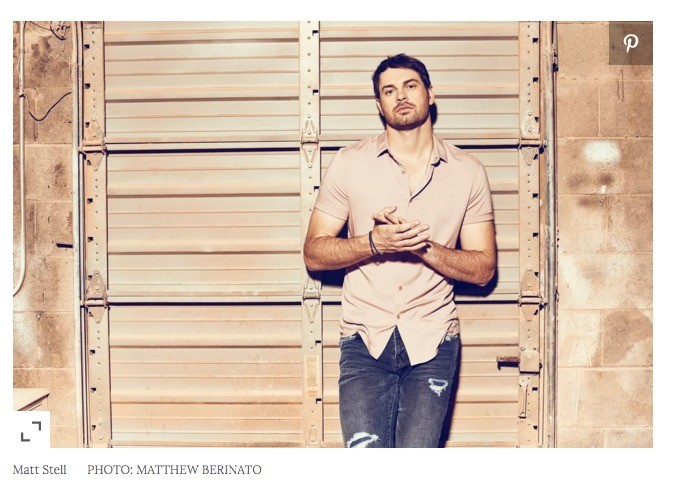 I’m such a sucker for beautiful lyrics, and when those lyrics are paired with a beautiful melody, and talented vocals.. it’s a talent-trifecta of HUGE proportions. That’s exactly what Matt Stell delivers!

It was the moment that Matt Stell had waited and prayed for, the moment this past April when the Arkansas native stepped into that famous circle at the Grand Ole Opry for the first time and sang the song that is showing every indication of forever changing his life.

It was also the moment his dad would have loved.

“My dad passed away about a year and a half ago but before he did, he came to town and we went to the Opry together,” the “Prayed for You” hitmaker, 34, recalled during a recent backstage interview in Chicago before his much-anticipated set at Country LakeShake. “We were sitting up there and I remember it was the Oak Ridge Boys, Will Hoge and Luke Combs. We were sitting up on the mezzanine on the church pew kind of on the left side as you face the stage listening to all of them and just having a great time.”

Stell takes a second, his wide smile subsiding for a bit as he looks at the ground beneath him.

“When I got into that circle back in April and looked up, I could clearly see where my dad and I had sat,” the 6’7” Center Ridge, Arkansas native says quietly. “It was bittersweet. I’ll always remember that. I wished my dad was there but it also made me appreciate the time we had together.”

For Stell, it was another emotional moment on an emotional journey that has taken the former Drury University basketball standout to once consider accepting an offer to enter into Harvard University’s Extension School pre-med program.

But Nashville and destiny had other plans and the self-taught vocalist and guitar-player made the move to Music City in 2014, quickly landing a publishing and management deal that would help set up the musical course that is playing out for him at this very moment.

“All of this has been quite a trip,” he tells PEOPLE with a laugh, fidgeting with the plastic cup he grasps in his hands on this rather chilly Chicago afternoon. “Right now, it’s a lot of hours and a lot of travel and a lot of airline miles and lots of cups of coffee. I’m just thankful I get to do it. I get to play music and write songs for people to enjoy them. That’s what I’ve always wanted to do.”

Having recently released his Everywhere But On EP, Stell’s star power is on overdrive thanks to the EP’s lead single “Prayed For You,” which continues its roaring trek up the charts. Written by Stell alongside fellow songwriters Ash Bowers and Allison Veltz, the song tells the story of someone who is grateful for receiving more than they possibly think they deserve.

And yes, in part, it tells Stell’s undeniable story.

“When I sit down in a room either just by myself or with co-writers, we are just trying to be as authentic as we can and try to tell stories that people can relate to,” Stell says of the song that has already amassed more than 52 million on-demand streams. “I always think of a song having its own character. It’s not necessarily going to be about me all of the time. I mean, Johnny Cash didn’t shoot a man in Reno! But the character in ‘Prayed For You’ is a lot like me, for sure.”

RELATED: Savannah Chrisley Stars in Her First Music Video (with Her Boyfriend!) After Dad Todd’s Approval

Of course, as his star continues to rise at a rapid speed, Stell continues to grasp not only to his ingrown humility, but also the values he was brought up on.

“I have a bunch of friends in Arkansas that couldn’t care less about all of this,” laughs Stell, who has now signed with Sony. “Their favorite thing is to go on a group text and make fun of me. So yeah, that really helps keep me grounded. You try to be a good person and you try to treat people with respect, and none of that changes when you are up here.”

It’s a philosophy that he also has learned from the country artists he has long followed and admired.

“You just look at these people that are standing on these stages and see how people react to their music, and then you try to find your own path to also do that,” says Stell, who will spend the remainder of his summer out on the road playing at festival dates such as Faster Horses on July 20, the Oregon Jamboree on Aug. 1 and Watershed on Aug. 3.

And as “Prayed for You” continues to make its way toward the top of the charts, Stell finds himself on the cusp of some of the most momentous pieces of his professional journey thus far. Not only will Stell join Chris Young on the next leg of his wildly successful Raised On Country World Tour, but Stell is also hoping that a full-length debut album is somewhere in his future.

“Let’s just say that I’ve got a pile of music and I’m writing all of the time for it,“ he remarks.

And for his personal life? Well, that’s thriving too — Stell is recently engaged and planning a wedding.

“I’m probably not as involved as some would want,” he says with a laugh, referring to his upcoming wedding to fiancée Sophie LeBlanc. “It’s a season of life that’s really, really busy and really, really great and we are just trying to enjoy it all, from the planning and the details to trying to sync up our schedules because she has a career of her own that she is a rock star in. She’s very driven and talented and smart and it’s been fun watching her career blossom as well. I’m just glad I am keeping up.”

“I’m just thankful I get to do it. I get to play music and write songs for people to enjoy them. That’s what I’ve always wanted to do,” the country singer tells PEOPLE