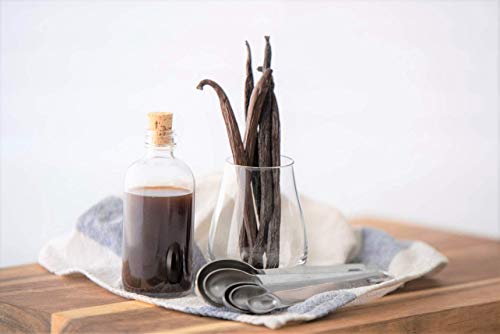 Food has always been a source of comfort, especially during stressful times as we’re recently experiencing. People have turned to the goodness of baking, sharing family recipes, and consuming foods at home made with natural flavorings and sustainable ingredients. And it’s no surprise that vanilla has seen a resurgence in popularity (not that it ever really went away for us foodies!).
Make sustainability your New Year’s resolution with Native Vanilla. The brand is known for producing the world’s finest quality ethically-sourced vanilla.
The seeds of Native Vanilla grew when it’s founder, Dan Edmiston, made his way back to the Papua New Guinea town where he had spent part of his childhood. Seeing the town’s need for economic survival, he committed to starting a company that harvested the beauty of vanilla while sharing the profits with the local micro-farm community.  Thus, quality for the consumer and a fair price for the farmer. As Dan likes to say, “To meet a need is to find true meaning.”
Remember the first time you smelled pure vanilla?
Whether you’ve used this delicious flavoring before or have recently been introduced to its natural goodness, vanilla in its different forms is delicious. The aroma and sweetness evoke childhood memories of baking at home with mom. For many today, they’re sharing and experimenting with these same ingredients with their own families, passing down the comfort of recipes to the next generation.
Native Vanilla embodies the richness and goodness of pure vanilla to make your recipes pop with flavor. It’s ethically sourced Tahitian and Bourbon vanilla beans. The Tahitian beans have a sweet floral aroma with fruity undertones while Bourbon beans have a more clear creamy flavor. 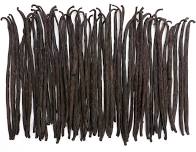 Product description:
Native Vanilla beans bring a tantalizingly delicious flavor and aroma to any recipe. Our Pacific Trader Tahitian Extract Vanilla is hand selected from the finest curing processes by our micro-farmer cooperative in PNG’s East Sepik province and are certified Grade B, premium quality vanilla beans. Grade B vanilla beans are shorter with a lower moisture content of 15-20% and are perfect for making vanilla extract.

Store the fresh vanilla beans in a tightly sealed airtight container, preferably a glass jar. Keep them away from heat and in a dark place such as a pantry or dark cabinet. Do not refrigerate the beans because this can cause them to mold.

We hope you get as much satisfaction from these vanilla beans in your recipes as we do in bringing them to you. Native Vanilla is about a lot more than beans. We are a company that is passionate about helping people. We strive to improve communities in Papua New Guinea by providing training and resources to micro-farmers. Then they can raise the yield and quality of their crop thereby improving their financial security. Native Vanilla is focused on, assisting around 400 micro-farmers, with plans to double that number within a year. When you purchase Native Vanilla products remember this; you’re not only getting the world’s finest vanilla; you’re also doing a world of good. Thank you.

Sanitize a glass bottle (any shape or size). Split the vanilla beans in half lengthwise using a knife or kitchen scissors to expose the seeds. If necessary, cut the beans to fit the bottle. Pour any brand of 70+ proof (35% alcohol) vodka into the glass bottle over the beans. The beans need to be fully covered using a ratio of 6 beans per 8 oz of vodka. If you would like a stronger vanilla flavor (what pastry chefs call double-fold extract) then feel free to add 2–4 extra beans. The answers for our future are often found in our past, and the seeds of Native Vanilla were planted by my parents’ adventure 30 years earlier. In 1981, my family moved to a village on the Karawari river in Papua New Guinea. In those young years, I saw PNG through the eyes of a child. At that time it seemed to me that everything necessary for life came freely from the jungle and river. Days were filled with paddling canoes, fishing on the river and foraging; life seemed bliss. In a country of 700 + languages, ours was spoken by a mere 4000 people. We were generously adopted into clans, seamlessly integrated within their culture and quickly became family.

Most people only had one pair of shorts, one t-shirt, and a machete or an axe, but with your garden, your family, and the wide jungle, it was enough. The men hunted, the women gardened, and the children played along the river. TO MEET A NEED IS TO FIND TRUE MEANING

When I came back in 2014 to visit my childhood friends, the village had changed, and so had I. Subsisting off the land no longer provided for the needs of a family. The world of 2014 required motors for the canoes and school fees for the children. Most villages are far removed from cities, leaving the people to cope with a lack of adequate education, difficult access to potable water, and little or no medical services.

To meet these new financial needs, villagers had begun to grow cash crops like vanilla. But due to their lack of familiarity with the newly-introduced plant, the farmers were not able to make the vanilla orchid produce at its potential. And even after cultivation, the farmers were faced with numerous obstacles preventing them from receiving a fair price for their labor. Local buyers were unreliable, visiting sporadically, or sometimes not coming far enough up the river to reach our village. It was an expensive undertaking for farmers to transport their vanilla to buyers in the cities, where there was no guarantee of receiving a fair price. In short, the promises of the globalized economy had already reached further than the benefits.

Shortly after I arrived in 2014, my village brother took me into his house and showed me his 5 giant bags of vanilla pods leaning against the wall. He wanted to know how much his vanilla would sell for. I had no way of answering – I told him I didn’t know what vanilla was worth. He then asked me the weight of one bag, and again I had no idea. He pressed me again for a guess, and I hefted one bag, but had to be honest – I simply didn’t know. I could see his disappointment. He shook his head and said that the buyers never gave a good price, and it always changed. And how can we trust their scales? But we take his price because we can’t eat the vanilla, he concluded.

The night before I left, many people were stopping by to sit together, tell stories around the fire, and exchange gifts with me as a way to show friendship. Amongst the people moving in and out of the house was my village brother. From the way he sat and waited, I could see he had something to say. After a late lull in the conversation, he asked me when I would come back again to see them. I framed my uncertainty in terms they could accept – in Papua New Guinea all good answers are based in stories, and a polite answer is not a short one. My children are growing older, I said, but my parents are growing older too, and if they are doing well I can come, but if they need help then I cannot leave them. This could be 2 years, it could be 4 years, it could be more.

He nodded his head, and then spoke slowly. Everyone needs help, and it is good that you help them, he observed. We need help too, in this place. Can you send us a hanging scale, like the buyers have, so we know how much our bags weigh? They will still give us a poor price, but we will show them our scale, and they cannot lie about the weight.

The powerlessness of the people struck me – at the mercy of the buyer, who names the price, who adjusts the scale, and who may decide not to buy from your village this year. The people worked their farms, harvested their vanilla, then waited and hoped, with no influence over the outcome. A scale would even the odds a little bit. Yet, the buyers would not like being challenged. What if the new scale caused the buyers to skip our village entirely when they came again? The people needed much more than a scale. They needed reliable buyers; they needed a clearly defined path to the markets.

The entire system needed to be rebuilt in such a way that farmers retained a fair share of the profits while protecting their land as well. As vanilla was a recent introduction to PNG, many micro-farmers weren’t familiar with techniques specific to vanilla, which resulted in low yields and wasted labor . A more reliable system was needed, which would increase their financial security, prevent soil depletion in the gardens, and raise the yield and quality of their crop by connecting them with information from veteran vanilla cultivators. Half-measures would do little, and I knew a short-term solution was no solution at all. THE ONLY LOGICAL ANSWER IS TO GO ALL IN

Upon returning from Papua New Guinea, I couldn’t shake the thought that I had been given a rare chance to make a direct change. I understood the culture, the people and could speak the language – I also understood the western business world.

I quickly decided to take the jump. I sold my successful Fintech company and began the vanilla journey.

I started to read the labels on all the vanilla products I saw. Rarely was there a clue as to the origins of the vanilla. I started searching the internet to find the route vanilla takes from farm to kitchen. Calling vanilla distributorships around the world eventually revealed a complicated chain of middlemen handling buying and transport to the various facilities for separate stages of vanilla extraction, bulk sales, and finally packaging for retail, with each stage adding cost to the final product that depressed the price that went to the farmer.

To bring the benefits back to the village, I realized we needed our own retail brand. These were the seeds of Native Vanilla.

NATIVE VANILLA IS NOT ABOUT CHARITY, IT’S ABOUT EMPOWERING TRANSFORMATION IN COMMUNITIES

Quality for the consumer, a fair price for the farmer: We wear our values on our sleeve. From the ink on the label to the adhesive under it, 100% of our packaging is eco-friendly and bio-degradable. Inside you will find organically farmed fairly traded vanilla, sustainably sourced from micro-farmers.

We are a company that is passionate about people. Native Vanilla is more than top-quality vanilla pods and products; it’s an opportunity to participate in improving communities. We partner with farming villages to implement projects that will have an enduring impact on the health and welfare for the entire community.