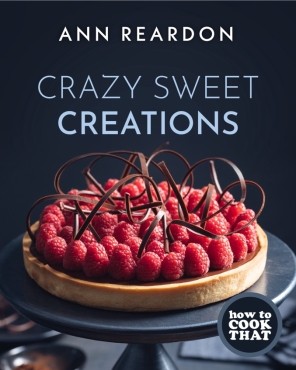 Praises for How to Cook That: Sweet Creations
“Ann Reardon is one of the sweetest bakers on YouTube. Her experience as a food scientist takes her confections to the next level; they are as creative as they are delicious. You will thoroughly enjoy every mouth-watering page of her first cookbook.” ―Rosanna Pansina, author of The Nerdy Nummies Cookbook: Sweet Treats for the Geek in All of Us

“Ann Reardon was a food scientist and a dietician before creating her massively popular channel called How to Cook That. Reardon focuses mainly on desserts, including novelty cakes and complicated baking techniques. She also teaches people how to fix baking fails and turn them into beautiful dessert creations.” ―Vogue “How to Cook That is the most popular Australian cooking channel in all the world, and it’s not hard to see why. Any sweet tooth would be entranced by Ann’s videos that document her creations, which cover all things dessert, from cake to chocolate.” ―PopSugar “Ann Reardon is a food scientist, which is sort of like being a chef who knows not only how to cook but why the things you’re doing in the kitchen happen the way they do.” ―The Blemish “Australia’s Queen of Desserts.” ―The Sydney Morning Herald
About Ann Reardon!
Ann Reardon is the creator and host of How to Cook That, the #1 YouTube baking series in Australia and #3 series in the US. Reardon is a certified scientist and dietician. After many years in food service, she started the How to Cook That channel out of Sydney, Australia in 2009. Reardon came up with the idea as she was night nursing her third-born son. She began with a post a week on her blog, and an occasional video. As her platform grew, she moved to YouTube and her follower count exploded. How to Cook focuses on desserts and pop-culture of all kind.
Offering a fun-filled step-by-step dessert cookbook, Ann Reardon teaches you how to cook tasty and delicious desserts. Reardon has made her claim to fame making pop-culture-themed treats from a giant KitKat to an Avenger’s Cake. Fans of the #1 YouTube channel and Surprise Cakes mobile app, the world’s first augmented reality for cakes featuring 3D dragons, unicorns, fireworks, and rainbows, will love learning to create desserts, chocolate creations, and confectionery.
For cooks connected to the latest trends in movies, shows, and social media. Take your culinary creations to influencer status, you’ll also: