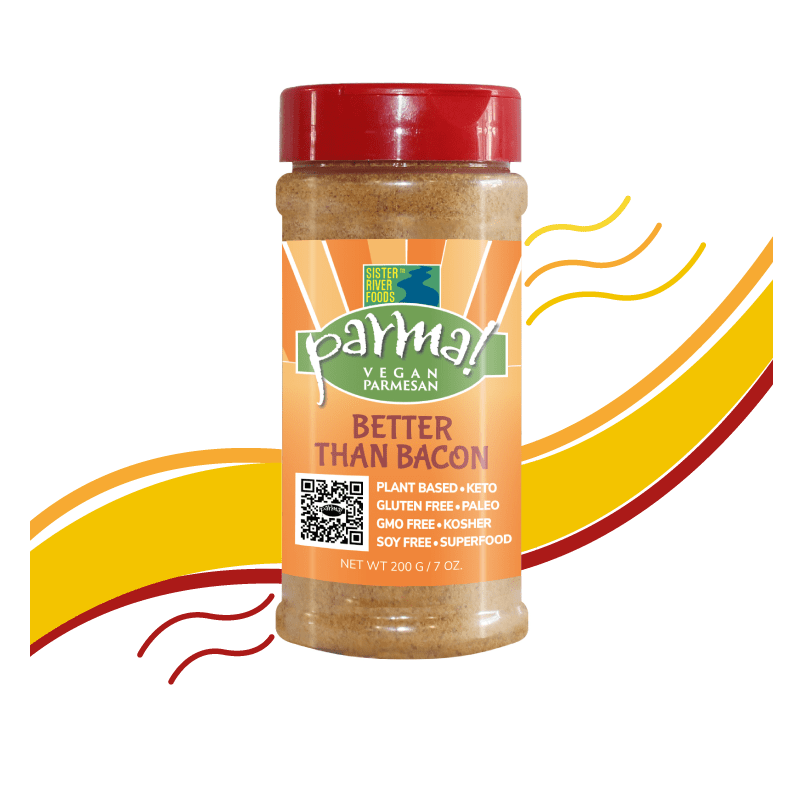 Better Than Bacon Parma! has a smokey cheesy umami bacon flavor, in a vegan no-baggage way.

Shannon Schnibbe, Founder and CEO of Sister River Foods and its subsidiary, Parma! has been passionate about creating healthy food options for more than twenty five years, when she first realized that food was making her sick. Faced with unknown sensitivities and allergies she ventured out in search of options.

“I just wanted to feel good”

Searching for ways to eat that did not make her feel sick, Shannon first encountered David Frees in Santa Barbara who introduced her to the raw foods movement begun by Ann Wigmore. She began exploring vegan and raw food options. Bolstered by the raw food movement, she sold her pots and pans and moved to Chicago. She stepped off the train and the first place she encountered to her delight was Karyn Calabrese’s first innovative raw food restaurant Karyn’s Fresh Corner. Shannon knew then that she had found the answer to her quest in delicious, nutritious, lovingly prepared and beautifully presented raw food.

“Eat In The Raw” Was Founded

Shannon was not alone in seeking alternative food options. After a trip to Hawaii she was inspired by raw nut delicacies, she founded “Eat In The Raw” and began bottling her delicious cheesy vegan, lactose-free creation. In 2004, supplied with info from HappyCow.net the first shipment of Parma! was sent to a local Ashland co-op from her Oregon facility.